Ja'Marr Chase had a historic rookie season after winning Offensive Rookie of the Year and making the Super Bowl. But now, what is next for the 22-year-old.

February 15th, 2022 was going to be a great day. Pitchers and catchers were going to report to their respective Spring Training sites in Florida and Arizona. Due to the owners initiating the lockout post-expiration of the collective bargaining agreement, that glorious day is, at the very least, delayed.

What Is A MLB Lockout?

A lockout is a work stoppage. Players cannot use team facilities. Front office staff cannot contact players. Current free agents cannot be signed. Players recovering from an injury cannot meet with team doctors. Tyler Glasnow, who required Tommy John surgery during the season, is not allowed to rehab at Rays’ facilities. Carlos Correa, the most desired shortstop on the market, cannot negotiate with teams.

What Caused The MLB Lockout?

The MLB Players Association (MLBPA) and the owners failed to come to an agreement before the expiration date. The action of the lockout itself was voted on by the owners.

There have been several meetings between the MLBPA and ownership. Despite that, little progress has been made. Not many details have come to light either. The owners made the first offer. The owners’ offer included a slight increase in minimum salary and a draft lottery that would discourage tanking.

On January 24th and 25th, the two sides met once again, with the MLBPA rejecting most of the proposal. Both sides did however abandon some of their previous sticking points, such as the MLBPA’s proposed age-based free agency, as opposed to the current service time format.

That same day, the owners committed to making a counteroffer. Instead of sticking to their word, they requested a federal mediator to intervene. Given MLB’s antitrust exempt status, asking for government help is like hiding behind the teacher after you picked a fight.

The MLBPA declined the request, and released the following statement:

“The clearest path to a fair and timely agreement is to get back to the table”.

As of writing, there have been no further meetings.

The few proposal components we know for sure have been agreed to are:

When Will the Lockout End?

Unfortunately, it could be a while. There are no limits on how long a side can wait to make an offer. Commissioner Manfred was optimistic the sides would come to an agreement before Opening Day. He addressed the media for the first time, with no plans to delay the season. The 1995 season was the last year the league actively canceled games because of a work stoppage.

Like so many fans, we at MLBDiamond are waiting with bated breath for the announcement that they’ve come to an agreement.

We can only hope that it comes before March 31st. 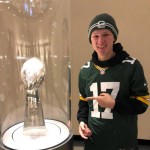 Born in Madison, Wisconsin, and raised in Des Moines, IA. 23 years old. I've grown up a diehard Packers, Cubs, and Hawkeyes fan. Can be found regularly diving into obscure statistics