Miami Dolphins running back Chase Edmonds is in a position to have his best year.

Entering his fifth season in the NFL, Miami Dolphins newly acquired running back Chase Edmonds is commonly seen as an average starting running back. In the four seasons he has played in the NFL, he has never had a 1,000-yard season and never had more than four touchdowns in one season. With the Arizona Cardinals, Edmonds was mainly used in an inside zone blocking scheme with some occasional outside zone sprinkled in. He was on his way to a career year in 2021 until he got injured and James Connor took over.

Career Year Could Happen For Running Back Chase Edmonds

With the new addition of Mike McDaniel as the head coach of the Miami Dolphins, the Dolphins will see a significant rise in outside zone runs. Chase Edmonds will be competing with Sony Michel to be the Dolphins new RB1 with the struggles of Myles Gaskin in 2021 and the uncertainty of Raheem Mostert’s healthiness.

But there’s a reason why he could succeed in a very big way. The San Francisco 49ers specialized in outside zone blocking. According to Sports Info Solutions, the San Francisco 49ers ran zone-blocking plays 282 times (sixth most in the NFL). When Chase Edmonds was given the ball on a zone blocking play he was first in the NFL in EPA (Expected Points Added) and first in yards per attempt with a whopping 5.8 yards per attempt. In 2021 Edmonds saw mainly inside zone with the occasional outside zone look.

The Cardinals ran their share of zones in 2021 but no one did it like Mike McDaniel and the 49ers. They ran the ball 48.39% of the time in 2021 (fourth most in the NFL). McDaniel was the mastermind of the 49ers offensive scheme, who was the former 49ers run game coordinator, offensive coordinator, and is now head coach for the Dolphins.

The 49ers have found luck with running backs who are extremely fast yet built at the same time. The last four rushing leaders for the 49ers all ranged from 5’10-6’0 in height and 190-210lbs in weight. Chase Edmonds is 5’9 207. Edmonds ran a 4.5 in the 40-yard dash and is known for his speed and acceleration once he hits the hole. Edmonds fits the bill perfectly to be the leading rusher in this new Miami Dolphins offense.

Regarding the role of the running back in this offense and how his skills lend to that position, Edmonds said, “It’s primarily why I came here. I believe in McDaniel, especially of the backfield because I feel like I can utilize my special abilities coming out the backfield, my route running, and mismatches on backers.” Edmonds was a player with the perfect build for the 49ers system. He also was the same guy who excelled when given the ball on zone plays last season.

With the revamped offensive line and the addition of McDaniel and his ability to maximize player potential, I see a very bright future for Chase Edmonds in Miami. I firmly believe he is on his way to a career season. 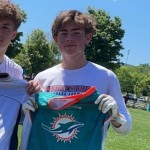 I am a student going into my second year at the University of Tennessee at Chattanooga. I am originally from Miami, FL but I’ve lived in Tennessee most of my life. Im majoring in sports management with the end goal to be working in the football industry any way I can. I am a lifelong dolphins fan and I’m very excited to be writing about them (without bias of course)!