As Mid-August rolls around the corner, the race to win each MLB Division continues to tighten as we speak. The Dodgers stand-alone miles atop the NL West after sweeping the Padres and Reds. The Mets hang on the NL East by a thread, as the Braves and Phillies continue to play chase. The Guardians take over the AL Central while the Twins and White Sox snap at their tail. With just under 55 games for each team to play, let’s take a look at the MLB standings as we continue to wind down towards what will be a thrilling end of the season.

Taking a Look at the NL West

Boasting a very impressive 10-game win streak, the Los Angeles Dodgers look merely unstoppable standing on top of the National League West Division with an extraordinary 77-33 record. After sweeping the San Diego Padres; who were indeed the biggest buyers at the MLB trade deadline: selling multiple top prospects in their farm system hoping to make a late push to take over the Division. It seems as if the Dodgers just keep getting better game by game, leaving what seems like no chance for the 63-51 Padres to sniff the top of the standings.

It isn’t all bad for the Padres, however, as San Diego recently took two out of three against the San Fransisco Giants in Petco Park. Juan Soto put the crowd into a frenzy on Tuesday night, launching one 395ft into right field- his first HR as a Padre. Manny Machado capped off the night with a walk-off three-run moonshot into the San Diego night, giving what fans hope to be a spark in the clubhouse for the playoff push.

The Padres currently stand third in the NL wildcard hunt, hoping to hold off the Brewers (who are only one game back).

Breaking Down the NL East

The Mets have taken over New York for the best record in the state, riding a rather impressive six-game win streak. Standing at 73-39, the Mets are on an absolute roll behind NL MVP candidate Pete Alonso. Alonso stands second in the MLB in runs batted in (RBIs) with 96. Keep In mind we are only in early August. Getting ace SP Jacob deGrom back at full strength into the rotation has given the Mets a massive boost in both talent, and morale within the clubhouse.

Behind the Mets in second place stand the reigning World Series Champion Atlanta Braves. Holding an impressive 66-46 record, the Braves are currently first in the NL Wild Card by four games, above the Phillies who are snapping at their heels with a 62-49 record. This top-heavy Division currently holds three playoff teams, and I would not be surprised if the red-hot Phillies make a late push for the top Wild Card spot, as they have won eight out of their last ten games.

The St. Louis Cardinals stand alone in first place within the NL Central Division. Paul Goldschmidt is currently the leading NL NVP candidate, hitting a ridiculous .328 on the season, with 26 HR’s and 84 RBIs. The scorching hot Cardinals have won eight of their last ten, and look to fight off the Brewers who stand a mere half game behind.

Cardinal’s third baseman and NL All-Star Nolan Arenado welcomed himself back to Coors Field, hitting two bombs in a three-game series against the Rockies. Home fans welcomed the future Hall of Fame talent back to the place where he spent the first seven years of his career, and he did not disappoint.

The Milwaukee Brewers -currently in second place within the Division- sit one game outside the NL wildcard. The Brewers hold a 60-50 record and recently gained 26-year-old Freddy Peralta back from Injury, which should help bolster the Starting Rotation. Brewers ace Corbin Burnes continues to dominate with a 2.45 earned run average (ERA) and is yet again a prime candidate for the NL Cy Young award.

The Brewers will take on the Cardinals in Busch Stadium Friday evening, for what appears to be a very exciting three-game series. The winner of this series will take first place within the AL Central Division.

Amidst Recent Woes, Yankees Stand Atop the AL East

Having lost eight of their last ten, the New York Yankees still stand a firm ten games in first within the AL East Division. Aaron Judge continues his historic season hitting .304, with 45 HRs and 99 RBIs. Judge has gone deep in 15 of his last 90 ABs, and is just the 4th player in MLB history to hit 45+ HR’s through the first 112 games of the season.

Outside of the Yankees, the rest of the Division is an absolute dog fight. The Toronto Blue Jays stand ten games back within the AL East holding a 60-50 record however, they are first in the AL Wild Card. Toronto recently dropped two in a row to the Baltimore Orioles -who sit fourth in the Division- yet are just a half of a game out of the third Wild Card spot.

Baltimore is currently on fire having won seven of their last 10, and look to make the Wild Card for the first time since 2016. The Rays currently hold the third Wild Card position in the AL and hope to fight off the young upcoming Orioles roster. Keep an eye on this Division, as it is one of the tighter races in the MLB.

When diving into the AL Central Division, we have three teams battling it out for first. The Cleveland Guardians recently took over the top spot and ride a five-game win-streak after sweeping the Houston Astros in impressive fashion. Guardians ace, and previous Cy Young award winner Shane Bieber has won all of his last three starts, holding a blistering 1.35 ERA over that span.

The Minnesota Twins stand in second place within the AL Central with a record of 57-53, merely one and a half games back from first place. After losing two games to the Dodgers, the Twins look to close the gap in their next series against the Angels.

Three and a half games back from first are the Chicago White Sox who currently stand in third place within the division. The White-Sox have been inconsistent thought the season yet, hold an even record at 56-56; with more than enough time to take over the top position within the division.

The Houston Astros hold firm control of first place in the AL West with a record of 72-41. Justin Verlander is defying Father Time and looks as if he is in his prime; holding an immaculate 1.85 ERA and 15-3 record, truly running away with the AL Cy Young. After being surprisingly swept by the Guardians, the Astros look to bounce back at home against the last-place Oakland A’s.

Holding a firm grasp on second place in the AL West are the Seattle Mariners. Despite missing 21-year-old superstar Julio Rodriguez with a wrist injury, the Mariners have continued their hot streak winning six of their last ten games, and taking two out of three at home against the ever-so dangerous Yankees.

The Mariners have grasped second place in the AL Wild Card with a record of 61-52, and look to make the playoffs for the first time since 2001.

As we dig deeper into the MLB season, there are plenty of tight races to keep an eye out for. The Dodgers continue to torch all of baseball with a ridiculous .700 win percentage, the Mariners hope to sneak into the playoffs for the first time in over two decades and Aaron Judge strives to make history in The Bronx. Blink once… you might miss greatness. 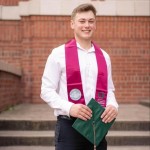 Nicolas Robinson is an aspiring Sports Journalist who recently graduated from the University of Oregon in 2022. Robinson's vast knowledge within the Sports Industry can help the general public better understand the business and nuances behind the beauty of Sports.