The Bears opened up the 2022 Preseason with a 19-14 win over the Kansas City Chiefs on Saturday, but what went right for the Bears, and what went wrong.

Bears football has officially been played! The Bears hosted the Chiefs at Soldier Field Saturday afternoon to kick off each team’s Preseason slate. Each team somewhat surprisingly played their starters to open up the game, as the Chiefs and quarterback Patrick Mahomes carved their way down the field effortlessly, ending the drive with a five-yard touchdown pass to tight end Blake Bell. That would be the only drive for Mahomes and co. after they surprisingly even saw the field.

Justin Fields showed that he has been working hard over the offseason Saturday with a couple of great plays in his short action, including a nice throw to Darnell Mooney in which the wide receiver made a very nice jump ball catch.

Fields also threw a very nice back shoulder pass to Tajae Sharpe on the sideline to covert a third down before the drive eventually stalled out. Overall, on the day Fields was 4-7 for 48 yards passing, adding a ten-yard rush as well. While the stat line didn’t show it, Fields looked much better himself than he did last year at this time. He went through his progressions much more efficiently and made some very accurate throws to keep Bears drives moving. His offensive line was no help in the effort as he took two sacks in just 18 snaps, something that will need to be cleaned up as we move through the rest of the preseason.

In their first NFL action this Preseason, Bears rookies all had great days, which can help Ryan Poles to breathe a little bit in the mist of everything going on with linebacker Roquan Smith. Jaquan Brisker kept his strong camp going through Preseason and hopefully he can keep it going through into the regular season. He was all around the ball for the Bears and just about got himself an interception on the day. All in all, the second-round safety from Penn State showed that he absolutely does have the talent to be a fantastic strong safety in this league with his solid and sound performance against a top-level offense on Saturday.

Over/Under: 79.5 Brisker total tackles as a rookie? – Powered By PickUp

One of the biggest stories in all of Bears Training Camp has been the play of undrafted rookie out of Wisconsin Jack Sanborn. The former badger has been lighting it up in camp and took his play up and beyond and into the Preseason, grabbing himself an interception very early in the second half after he jumped a hook route with some good hands before running it 13 extra yards to set up the Bears offense for an eventual touchdown.

The rookie also added seven tackles and a fumble recovery among everything else he did in his productive debut. Jack Sanborn is for the Bears, and they can’t hold his UDFA status against him much longer, he is playing like someone who should start on this team, and with everything going on at linebacker, from Roqua to the major depth issues, he should see some time with the starters, and more games like this, we may see #57 out on the field against the 49ers week one.

In their return back to action, the Bears had a lot of things go the way they were hoping it would when a lot of these rookies were taken, and if these rookies can prove they can all play, maybe some heads will be turned in the windy city, and all around the league. 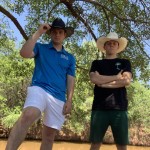 A kid from Minnesota with an undying love for the Bears since birth, serving the country in Texas currently