The Rams head to Cincinnati on Saturday to play in the third and final preseason game of the season. As we look ahead to the matchup, here are things to watch for.

On Saturday, August 27, the Los Angeles Rams will be visiting the Cincinnati Bengals in the last of their three preseason matchups. At 6 p.m EST, they will kick off under sunny, 85-degree conditions. There is a 10% chance of rain during the contest.

The Rams will be paying back the Bengals’ trip they took to SoFi Stadium in February where they bested the Buckeye bunch in Super Bowl LVI, 23-20. This will be the only rematch we get of last year’s blockbuster championship game as the two teams do not meet in the 2022-23 regular season. Both coaches, while surely wanting to prove their team’s mettle, will be pulling some punches in the upcoming showdown. Starters for both teams will be inactive Saturday. Both teams are trustful of their starters’ preparation and skillset, and are now feeling out the depth on their respective rosters.

Advertisement. Scroll to continue reading.
Title Defense: How far will Rams go in 2022? – Powered By PickUp

What To Watch In The Rams Final Preseason Game This Saturday

Lance McCutcheon burst onto the scene during the first preseason game of the year versus the Chargers. He put up a hefty debut stat line of five catches for 87 yards and two touchdowns. He added an additional two-point conversion reception as well, all coming from the hand of third-string quarterback Bryce Perkins. He led the team in receiving, posted a highlight 60-yard touchdown catch, and earned the team’s “game ball” after their contest.

He showed no signs of slowing down in the narrow loss to the Houston Texans last Friday, again topping the Rams in all receiving categories. He nearly reached the 100-yard mark in just his second showing, averaging 19.2 yards per reception.

McCutcheon will make it very hard for the team to deny him a roster spot if the six-foot-three, 205-pound Montana State product can put up another impressive, final act. Certainly a young name to watch as the third WR slot seems to be wide open due to wideout Van Jefferson’s recent knee surgery, and the uncertainty of free agent WR Odell Beckham Jr. returning.

Cornerback Cobie Durant is a fourth-round rookie that has so far impressed in Rams training camp. Hailing from South Carolina State; he earned First-team All-MEAC honors, 2021 MEAC Defensive Player of the Year, and helped the Bulldogs win the Cricket Celebration Bowl. After a slow start against the Chargers in their first game, Durant saw an uptick in snaps the next week against the Texans.

With those 23 plays, he was able to garner two solo tackles, a sack, and a pass deflection. The sack came during the first quarter just as starting QB Davis Mills scrambled out of the pressurized pocket, and a blitzing Durant tracked him down.

He’s showing impressive field vision as well as a motor that runs extremely fast. Even the likes of Kevin Durant showed some love by quote-tweeting a photo of the Rams cornerback: “Somehow this is my cousin. Ima Rams fan now.” With the amount of draft capital spent on him, and the early feedback buzz, he’s not in the roster bubble discussion. But he will stay someone to watch closely as he molds under the likes of defensive-back superstar Jalen Ramsey.

Third year QB Bryce Perkins has taken the majority of preseason snaps for the Rams. He played every offensive snap of the game against the Chargers, and the entire second half against Houston. Combined, he completed 22 of 30 passes for 256 yards and two touchdowns, adding a two-point conversion pass and two rushing TDs.

His mobility and improvisational skills accentuate McVay’s offense. Even though these are against lesser opponents, seeing Perkins’ raw talent finally marrying with their desired vision and playbook understanding is a good sign for the 25 year-old.

He’s looked locked-in and shows no signs of being cut at this stage. In fact, he has made a push in some fans’ eyes to become the backup to 14-year pro Matthew Stafford. That push has prompted McVay’s response to a QB battle as something he’s “continuing to evaluate.” This last game could be another split which could help Perkins make that argument for himself.

Given that the trade to acquire Stafford seemingly set the Rams on the path to win the Lombardi trophy earlier this year, the backup job has become quite a hefty responsibility.  If Perkins can rise to the occasion, it may just make enough people in the building question if he is the right man for the job.

The Rams Roster Continues To Take Shape Ahead Of Week Three

As mentioned earlier, Rams Head Coach Sean McVay is searching for depth pieces that can help along the way to another World Championship. These guys above, and many more young guys are getting a chance to both show what they have, and learn more of their playbook and the game in general. The recent cuts of kicker/punter Cameron Dicker, tight-end Kendall Blanton, and running back Raymond Calais, is giving more clarity to the outlook of the team. More defensive backs and wide receivers will surely be headed out of the door seeing as the Rams seem to have plenty of “roster fat” at those positions.

Possibly most important, the offensive line is being felt out. With a rearrangement that stemmed from the retirement of 2021 Walter Payton Man of the Year, left tackle Andrew Whitworth and departure of offensive guard Austin Corbett, the Rams drafted OG Logan Bruss out of Wisconsin to help with their depth, and then subsequently lost him for the season due to an ACL/MCL tear he received during the Texans game.

Joseph Noteboom was re-signed to take over tackle duties and has only played more than eight offensive snaps once in his career, per therams.com. McVay and the rest of his staff will be looking to the big men in the building as the free agent market has essentially dried up at the position.

Some who are on the roster-bubble include; TE Roger Carter Jr., safety Daniel Isom, and linebackers Keir Thomas and Jake Hummel. These players and several more are counting on meaningful practice time and snaps against the reigning AFC champions to make a last-second push for the 53-man squad. As the Bengals have been bested twice so far, I will choose to believe the Rams end the preseason on a high note. I predict Perkins to produce more in his half than Wolford and finish off better than he did last week against the Texans. I expect another monster game from “Mc-CLUTCH-eon” and a good amount of scoring to happen. 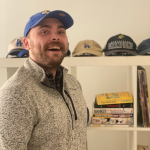