The Los Angeles Lakers are a proud organization with a long history of winning. That being said, last season was probably one of the most disappointing seasons in their history. In regards to expectation coupled with results, it was an utter failure by any measure. They only won 33 games and missed the playoffs entirely.

Injuries to their two best players plagued the entire season. LeBron James, Anthony Davis, and Russell Westbrook only played together for 21 games. That’s barely a fourth of the season. It’s hard enough to win in this league as it is, and even harder if you don’t have your star players. Look at how far Golden State fell after Kevin Durant left and Klay Thompson was out with an injury for an entire season. Success and winning can be very fragile in the NBA.

The Lakers Running It Back This Season

The elephant in the room all offseason has been the fate of Russell Westbrook. There have been countless rumors about him being traded, but none of them have come to fruition. So, for now, at least, it looks like the Lakers will be running it back with their big three.

This is a disappointing prospect to a lot of fans. Many of them blame Russ directly, and think he’s a “bad fit”. The truth is they never got a fair chance to gel last season. So, saying Russ is a bad fit is a bit hyperbolic. There was only a 21-game sample to go by. It’s kind of hard to come to a conclusion that concrete, with that small of a sample size. The truth is the results of the experiment were inconclusive.

Frank Vogel was also a hindrance to the potential of the fit. He was experimenting with so many lineups that chemistry was a mess all season long. Guys didn’t know their roles or how many minutes they would be getting on some nights. That played one of the biggest factors, next to injuries, in the Lakers’ failures last year.

Thankfully things have changed for the better, as far as coaching is concerned. Darvin Ham brings a nice resume as a first-time head coach. He even has experience as an assistant on the Lakers from 2011-13. With a no-nonsense attitude and a commanding presence, Ham is a refreshing change for a lot of fans. There shouldn’t be any ambiguity about lineups or minutes going forward.

This Is Still Not Ideal For The Lakers

The Lakers have a new coach. The roster got younger this season. The extra two months off, from not making the playoffs, helps the older guys get some much-needed rest. There are some nice positives going into this season, but there are also still some flaws with this team’s construction.

The first and most glaring problem is the fact that they have so many undersized guards. It’s like they loaded up in anticipation of a trade that never came or are just keeping the cupboard full for that eventual trade. There are only so many minutes to go around in a game and trying to split them up between six very deserving guards is going to be a difficult task. Darvin Ham is in an unenviable position.

The other big question mark on the team is shooting. They have some good shooters, but no one that is great at it. Most of them hover below the 40% mark for their three-point shooting. They may see a slight bump this year playing with the gravity that LeBron demands on the court. It’s also possible that the bright lights and big city of Los Angeles do the opposite. You never can tell. Just ask Glen Rice.

Without good shooting, this team could be in for another long season.

Darvin Ham’s Vision For The Lakers This Season

Darvin Ham has been preaching defense ever since the Lakers hired him and the first reporter shoved a mic in his face to ask. He comes from a Milwaukee Bucks staff that has had a top-ten defense the last three seasons. With a resume like that it’s easy to have confidence that he’s the right guy to do it. Not only has he had success, but it was also recent.

The defensive scheme is supposed to generate more easy buckets and more opportunities to get out on the fast break. This can help them hide their shooting problems, potentially. They do have the young legs now to do it more often than they did last season. It shouldn’t be just talk this time.

This faster style of play is better for Russ too. Part of his issue last season were the older legs he was surrounded by. He had to change speed a lot to accommodate them. He shouldn’t have to do that with these younger guys. It just might work.

If Darvin Ham is successful in bringing his vision to the court the Lakers could have a high-flying world revenge tour this season. If he isn’t, it could be another long season. 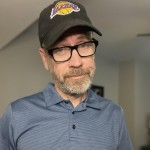