On Sunday, September 25th, the Jacksonville Jaguars dominated the Los Angeles Chargers with a 38-10 victory at the Chargers’ home field, Sofi Stadium. What many Chargers fans and media members were already considering a potential upset loss at home, became realized very quickly, as the Chargers failed to record a single first down over the first 15 minutes of game action.

Star quarterback Justin Herbert entered the weekend with a questionable injury designation due to a rib injury suffered in Week Two’s loss to the Kansas City Chiefs. A couple of hours before the game kicked off, Herbert was declared active and was the team’s starting quarterback.

It became very apparent that Herbert’s rib injury was limiting his ability to play at full strength, which led the Chargers’ offense to begin the contest with two three-and-outs on the team’s first two drives on offense and zero first downs through the first quarter of game action.

On the team’s next defensive drive, the Chargers’ star pass rusher, Joey Bosa, went down with a groin injury that removed him from the remainder of the game. On that same drive, they gave up a field goal, which was the first score of the game.

The Chargers then trotted back onto the field for their third offensive drive, which lasted one play, as Herbert threw an interception on a pass intended for running back Sony Michel.

The Chargers then gave up another field goal that put them at a 0-6 point difference. Surprisingly enough, after three sluggish drives on offense and losing cornerstone defender, Joey Bosa, the team was still in a prime position to come back and make the game competitive. At the beginning of the second quarter, the team showed their first glimpse of success on offense and was finally able to secure a first down.

Unfortunately, the Chargers’ struggles continued. Three plays after the team’s initial first down, Herbert was sacked by Jaguars defensive end, Duwuane Smoot. Smoot’s sack resulted in a fumble that Smoot was able to recover.

The Chargers’ second turnover on offense led to the Jaguars marching down the field and scoring the game’s first touchdown on a fourteen-yard completion from quarterback Trevor Lawerence to wide receiver Zay Jones. This touchdown put the team at a 0-13 point difference, which felt much bigger considering the team’s struggles up to this point.

A Sense of Optimism

On the following drive, the offense finally started to look like the explosive team that Chargers and NFL fans are so used to seeing. Quarterback Justin Herbert went 6/7 for 75 yards, finishing the drive with a 15-yard passing touchdown to wide receiver, Mike Williams. This drive showed that the team was very capable of competing and potentially winning this game. Unfortunately, that touchdown catch was Mike Williams’ only catch of the game and the Chargers’ only touchdown of the game.

As for the rest of the contest, the Chargers only managed to put up three more points while surrendering twenty-five points to the Jacksonville Jaguars and losing 38 – 10. It made sense that the Jaguars showed up at Sofi Stadium ready to perform, considering they were coming off of a 24-0 thrashing of the Indianapolis Colts in Week Two.

On the other hand, in a game where the Chargers hoped to bounce back from a crushing defeat at the hands of Patrick Mahomes and the Kansas City Chiefs, the team was not prepared for this ballgame. It did not help that the team went into Sunday unsure who would be taking snaps from under center, as backup quarterback Chase Daniel took first-team reps in practice the week leading up to the game.

From top to bottom, this is one of the worst collective efforts that I’ve seen from the Los Angeles Chargers since last year’s embarrassing loss to the Houston Texans. Herbert’s rib injury was clearly a factor, as he posted his lowest quarterback rating of the season (74.0).

The offense was anything but dynamic and explosive, like they’ve shown against the Raiders and Chiefs. The defense was picked apart through the Jaguars’ rushing and passing game, with quarterback Trevor Lawrence throwing three touchdowns and no interceptions and running back James Robinson rushing for 100 yards and a touchdown.

The biggest takeaway from this contest is all of the injuries that the Chargers sustained in this contest. Three players sustained injuries severe enough to have them land on Injured reserve, offensive tackle Rashawn Slater (bicep), outside linebacker Joey Bosa (groin), and wide receiver Jalen Guyton (knee). Guyton and Slater’s injuries will have them miss the rest of the Chargers’ 2022 season, while Bosa is expected to miss eight through ten weeks.

It will be interesting to see how the team manages to fill these holes, especially considering how important Slater and Bosa are to the team’s success. As it stands, the team will have rookie offensive tackle Jamaree Salyer filling in at left tackle and a combination of outside linebacker Kyle Van Noy and defensive end Chris Rumph II filling in as primary edge rushers.

The Los Angeles Chargers hope to bounce back in Week Four on the road against the Houston Texans, who are 0-2-1. The game has an over/under of 44.5 and the spread of Chargers -5.5, (per sportsbookwire.usatoday.com).

I’m predicting the under and the Chargers covering the spread, with a final score of 27-13. 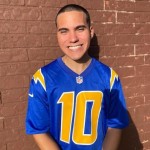