The Miami Dolphins were off to a hot start before Tua got injured. Here are three reasons why that fire reignites Sunday Night.

Before the season if you told a Dolphins fan that the Fins would be three and three going into Week Seven, they would probably agree with you. None of them, however, could have predicted the route the Miami Dolphins took to get there, Nobody could have foreseen the agony of starting as one of the hottest teams of the NFL, losing Quarterback Tua Tagovailoa to a concussion injury, and losing three straight.

But it is a long season in the NFL. And Dolphin fans, of all people, can attest to that. Tua had a broken rib last season that left him sidelined for Six Weeks, but the Dolphin’s offense wasn’t what it is today with him on the field. After having the number two-ranked offense in the NFL in the first three weeks of this season, the previous three weeks saw the Miami Dolphins at 29th in the league. Granted, what is shared between last year and this year is the Miami Dolphins are winners of contests that Tua starts and finishes.

With that being said, do I see the Miami Dolphins rattling off a seven-game win streak as they did just a year ago when Tua returned from injury? Yes. It is possible considering the Dolphin’s upcoming schedule. After the Steelers on Sunday night, the Dolphins go to Detroit, then to Chicago, and finally home against the Browns before their Week 11 bye.

Let’s not look too far into the future quite yet though. Let’s focus on the three reasons the Miami Dolphins will win on Sunday Night.

Edmonds vs. Mostert: More touchdowns in ’22-23? – Powered By PickUp

It’s hard to deny the dynamic duo of their receptions and yards when they go blazing past you without any forewarning. It makes it hard for defenses to sit into coverages because they’ll blow the top off, and then go underneath for yards after the catch once you adjust. Tyreek Hill is currently the league leader in receiving yards at 701, while Jaylen Waddle comes in fifth at 533. They are a nightmare for defensive coordinators to gameplan against and they’re a compliment to the skill sets of the others playmakers on offense. If you double one, you leave the other open for business. Good luck with that.

Head Coach Mike McDaniel has been called a run game “genius” a few times, and I think most Dolphin fans can agree we’re starting to see that come to fruition. Last three weeks, Raheem Mostert averaged 4.6 yards per carry, yet his most carries came last week when he has 18. Last week, he was averaging a whopping 6.3 YPC, so it looks as if Mostert is getting stronger and finding his groove again in McDaniel’s offense. Look for Mike McDaniel to trust his run game and get Mostert 20 carries if he’s averaging over six yards a haul. Not only that, but a good run game will help take the pressure off of our next subject.

It’s that simple. Mostert said it best this week in an interview “He just comes back and there’s just like an aura around the whole huddle.” The team responds to Tua. He is simply a leader. A winner. And that can’t be coached to a player. It’s pure character. And I believe that anytime Tua Tagovailoa is healthy and at the helm for the Miami Dolphins, every player in aqua and orange is ready to go to war with their brothers. You don’t have to love Tua, but you have to respect his willingness to compete, and put his body on the line, for an organization that hasn’t always shown him they had his back.

Be sure to follow Dolphinatics on Facebook, and check out FanRantHQ and StadiumRant for your sports and outdoor news! 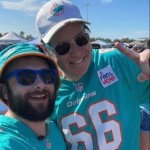