After the Saints’ 24-0 win over the Raiders on Sunday, they find themselves in the third-place spot in the NFC South. At the halfway point what can the team do to muster up enough wins to make the postseason?

The Saints Of Old Have Returned?

In the shutout win over the Raiders, I felt like I was watching the 2018 New Orleans team. The offense was clicking and the defense was even better.

What a sight for sore eyes the offense was. The offensive line looked great. Cesar Ruiz is finally coming into his own and living up to his early draft position. Andy Dalton held on to the ball and made smart decisions. Last but not least we saw Alvin Kamara return to the endzone not once, not twice, but THREE times.

On the defense, the fans’ prayers were answered. The pass rush was amazing. Marcus Davenport reemerged as a threat off the edge and so did *rubs eyes* Payton Turner? The Saints looked like themselves again with an overall four sacks and consistent pressure.

The run defense, which has been the team’s best feature in recent years (aside from this year) came to play as well. After three straight 140+ yard games, Josh Jacobs was held to only 43 yards on the day.

The most impressive part of the game in my eyes was the secondary play, especially by Alontae Taylor. The rookie corner out of Tennessee made his mark on Sunday when he helped hold one of the very best in the league, Davante Adams, to a single reception for three yards. He can very well be the new CB2 for this team.

Looking Forward For The Saints and NFC South

The Saints are luckily a part of the worst division in football, so the NFC South title is still up for grabs. New Orleans is tied for second with the Buccaneers, who have the head-to-head tiebreaker. The current standings are:

Only one team sits above .500 but that can change in the coming weeks.

The division-leading Falcons face the high-powered offense of the Chargers next week in what should be a tough matchup for them followed by games against the Panthers on a short week, the Bears, then the Commanders.

The struggling Buccaneers coming off of back-to-back losses face off against the Rams followed by the surprising Seahawks, the Browns, then a divisional matchup with New Orleans.

The Saints have a Monday matchup with the banged-up Ravens then follow it up with games at the Steelers, vs the Rams, and the 49ers in San Francisco.

The dumpster fire of the Panthers will head to Cincy to take on the Bengals, then the Falcons on a Thursday Night game, moving to the Ravens and Broncos afterward.

With the unpredictability of the NFL this year, we could see a shake-up in the division.

In these next few weeks, we should (hopefully) see the returns of Michael Thomas, Jarvis Landry, Marshon Lattimore, and PJ Williams. However, given the injury history of the team, I wouldn’t bank on it.

The Saints can use this big win as momentum moving forward. Catching fire in this division could set them apart from the rest of the group.

For more Saints content make sure to check out more of our articles at WhoDatHype.com and follow our social media pages @WhoDatHypeSR on both Facebook and Twitter. We’re also on Spotify! Listen to our podcast at NFL on Stadium Rant Podcasts. 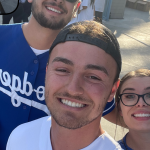 A current Arizona State Student, Karson is pursuing a Bachelor's degree in Sports Business. He aspires to be a successful figure in the sports industry.