Even with the Vikings’ personnel being similar, nothing from this season’s team to last season’s team is an apples-to-apples comparison. Much has been made of the defensive scheme change and the different emphases that govern the playcalling on that side, but there is a lot of the same on the offensive side of the ball. That means we can’t judge Adam Thielen’s (or any player’s) performance this year based upon production alone. So I watched every single offensive rep from this season to see how he’s performed on an individual level – Is he getting open? Is he being given opportunities? – and come to a final opinion on how I feel about Thielen moving forward.

The Bottom Line For The Vikings

The contract (as it is currently structured) looks, frankly, like a poor return on investment for the Vikings right now. Looming cap hits of $19.97mil in 2023 and $21.66mil in 2024 have marred many perspectives on his 2022 season.

For this reason, as many fans try to digest these losses and the offensive shortcomings Thielen has become a bit of a pariah in some fan circles. A scapegoat, even – which I understand. Our brains want it to be an easy fix and the eye test on the broadcast has not been great for AT but we don’t see the whole picture. This is why we watch the film.

Can He Still Separate At A High Level?

The short answer is: yes. Just, not as often.

Adam Thielen is indubitably past his prime; but his prime was phenomenal. So, similar to Dalvin Cook, he is still well above average for his position even after having lost a step.

As the sun has begun to set on the career of Adam Thielen, Justin Jefferson’s has paused at high noon on the summer solstice. Adam Thielen is simply not a functional necessity of this offense most of the time.

Adam is a guy to whom I don’t think that matters very much as long as the team is winning. He loves his teammates and he lifts them up. He’s often been the first to cheer on the likes of Jefferson and Osborn after their many big plays this season.

Thielen’s dip in production is only very loosely tied to his regression as a player. The reality is his target share is much, much lower – largely due to the progression of his All-Pro teammate.

The version of AT19 to which Vikings fans are comparing their opinions of this year’s is that of the 2018 season. His first year with Kirk and his last healthy year (limited by injury in 2019, played just 10 of 16 games) without Justin Jefferson. Keep in mind as well, that season’s targets were split with Stefon Diggs who missed just two games.

He caught everything that season.

There have still been plenty of plays on which Thielen has gotten open against man or match coverage and on a LOT of them, Justin Jefferson is just more open or open sooner. Kevin O’Connell’s Vikings switch release out of bunch or stack alignments to get Jefferson looks. Thielen jet motions often to misdirect the defense away from the progression and is even used to chip block defensive ends from tight alignment from time to time (can set up plays like these).

The greatest value Thielen still brings comes from his sure hands, some of the surest in the NFL. For this reason, he’s still one of the best in “gotta-have-it” scenarios in the RedZone and on third down. A staggering 45 of his 70 catches (over 64%) have gone for first downs. To put into perspective, Jefferson’s first down rate this season was 62.5%, and think about how often you saw his signature two-arm point when he moved the chains.

Adam Thielen spent the last six seasons of his career as a full glass. This season he’s shown some cause for concern as he reaches age 32. We know it’s not his hands, and we know his route running hasn’t exactly fallen off a cliff. What’s been missing is his dynamism after the catch. For a few seasons, he made people miss at a high rate and, by the eye test at least, had much better long speed.

However, in the eyes of the fan and the front office, a player’s performance is measured against his price tag. So where does that leave us? Will Thielen even play out his current contract all the way through?

We talked about the scheduled Cap hits for 2023 and 2024 already and after combing through every offensive snap and every metric I could find I’m able to confidently say he is not worth those figures.

The thing is: He won’t play at that cap number – and he won’t be cut or traded on this contract either.

To cut or trade Adam Thielen would incur a dead cap hit of $13.55 million next season. This is nothing like the situation with Anthony Barr, who is actually still on the Vikings’ books this season with a dead cap number of over $9mil, where the Vikings were actually better off clearing what space they could and moving on from the injury concern. Add in the regime change (Barr was Zimmer’s first draft pick) and it made sense to start fresh.

This is a different situation. I’d rather see Thielen make $20million and be overpaid than have to use ~ $6million to supplement what he brings to the team while still paying him over $13million to not be on the team.

Luckily, this is not a binary discussion. Behind door three is what actually makes sense for both sides: a restructure. Thielen just freed up $5.16million for the purple in March by restructuring his deal, and $7.5million in March of 2021 by agreeing to convert $10million of salary into bonus.

The latter version of this trade-off is very player friendly as well, as the player sees the converted money immediately as a bonus check. It also would of course grant the Vikings more cap space to navigate this offseason.

The Vikings will actually need to restructure multiple deals to get into the positive so they’ll almost certainly approach Thielen with a proposition to restructure. Some don’t like the “kicking the can down the road” approach that many modern front offices take with the salary cap, but the reality is this team will be coming off of a 13-win season (regardless of playoff result) and will be looking to stay competitive this offseason to improve the team.

You do not take on dead cap hits for players who are still playing well when you are in a winning window. This year and next are exactly that.

My last point on this situation is this: Adam Thielen does not want to play anywhere else. Why would he? He and his four-child family are rooted in Minnesota and he has played his entire career to this point for his hometown team. It doesn’t get any better than that.

It is my disposition that the Detroit Lakes native would sooner retire than go play for a new team via trade or cut–>sign. I’m thinking he’ll do whatever he can to help the team financially as he takes as many more swings as he can at a Super Bowl season.

Keep an eye out for Adam in today’s game and watch how many different things he does for this offense outside of big plays in the passing game (of which they get plenty from their Pro Bowlers). I look forward to AT19 retiring in Purple, joining the Ring of Honor and, Football-God-willing, goingn out with a Super Bowl ring. 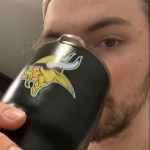